About half the area is open/semi-open (pasture for cattle) and half woodland (conifers). The whole area is fairly runnable except for areas of broom in the open pasture and some fallen trees in the forest. Forest mapped as “white” is still often dense enough to slow runners down a little. Fallen trees do not feature on the map unless they cover a significant area, in which case the undergrowth symbol is used. There are no green crosses for individual fallen trees or tree-stumps.

The terrain is generally sloping with scattered boulders, either individual or in clusters. Some smaller boulders (< 1 metre) may be clearly visible in the terrain but are too small to be shown on the map. Some of the boulders on the map (> 1 metre) may be obvious when seen from below but much less so from above.

The transition from full yellow (fast open) to 50% yellow (rough open) is sometimes fairly arbitrary, indicating a gradual change to a few more patches of broom or longer and tuftier grass.

There are several dozen boundary stones in the forest, about 50 cm high : there are too many of these to be included on the map.

In the open/semi-open terrain there are many single conifers, so many as to be unremarkable. They are mostly shown with a white patch in the yellow. Deciduous trees are far fewer and much more remarkable, and are shown using the green circle symbol.

Courses A to L have a mandatory road crossing (marshalled), with controls before and after. The race timing will be stopped between these two controls but please do not wait around unnecessarily. You must not cross the road elsewhere, or run along it. 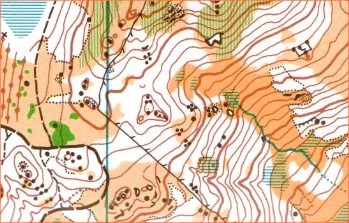 Entries for O'Cerdanya are now closed; we thank you for having entered. We request you to check on the Orienteeringonline website the details concerning...

We present the model of the technical t-shirt  (offered to any participant registered on the 5 days) To purchase additional units please ask in...